AMD’s Zen, Zen+, Zen 2, and Zen 3 generations have all been very power efficient, while Intel’s previous flagship SKUs had up to 250W power usage. Thankfully, Intel finally updated its node process (14nm++ to 10nm) and used a hybrid (big.LITTLE) architecture for Alder Lake.

However, even with AMD’s and Intel’s efforts to bring efficiency to the table, some CPUs still use more power than we want them to. In such cases, the processor can be undervolted to draw less power while delivering the same amount of processing power.

This guide covers questions regarding the safety of undervolting, its purpose, and, of course, how to undervolt a CPU.

Why Should You Undervolt Your CPU

Before we get on with the steps to undervolting a processor, it’s best that we first explain how it works and its benefits.

CPUs use different amounts of power based on the task they are working on. For example, tasks like gaming or rendering require a lot of processing, so the CPU starts drawing considerably more power.

Depending on the CPU model, strenuous tasks can lead to a power draw of up to 300W, while basic online browsing can be around 50W or less.

High power draw brings a couple of disadvantages: it reduces the CPU’s lifespan, increases heat output, and leads to higher electricity bills. To get that temperature sweet spot, users can undervolt their CPUs.

This is done by lowering voltage requirements while maintaining the same CPU speeds. In some cases, the core clock frequency can be reduced for even lower power consumption.

So, undervolting for small-form-factor cases, laptops, or console-like devices can be extremely useful.

Here’s a video from Optimum Tech explaining the benefits and safety of undervolting:

Playing around with a CPU’s power draw in BIOS can be a scary thought for most people. But, undervolting compared to overclocking is relatively safe since it effectively reduces the CPU strain on the CPU.

Note that lower voltage may cause system instability (crashes, stutters, or freezes), but it will not damage the CPU. And if you do face instability, you can always reset back to defaults.

What You Will Need

Before we can start this guide, there are a few things you need to have ready:

It’s time to set a baseline which will be used later to figure out the performance detriment from the undervolt. The less performance you lose, the better.

So, first, you’ll need to write down your idle power numbers. Then, close any application/program on your computer except HWiNFO. This includes your browser, Spotify, or even Windows’ file explorer. Try not to move the mouse at all.

Hit the Reset values button, wait a couple of minutes and write down the max package power and max CPU temp. Write these values in your spreadsheet under the IDLE category.

Reset values again and repeat steps 4 through 6. We do this to get an average. A more accurate baseline to ensure that the initial testing wasn’t one-off.

Here’s a quick glance at what the spreadsheet should look like:

NOTE: These values are inaccurate and do not represent actual CPU values. There will also be a lot more variation in values between testing.

The process of undervolting AMD and Intel processors is a bit different, so we’ll split this article into two categories.

However, since AMD’s Ryzen CPUs are prevalent, we’ll focus specifically on these.

When using HWiNFO for AMD Ryzen processors, focus on the CPU (Tctl/Tdie) and CPU Package Power (SMU) sensor readings. Specifically, the maximum values because we want to go below those default numbers.

Before we jump into classic undervolting in BIOS, we suggest checking out the Clock Tuner program by 1USMUS. Much more beginner-friendly and does most of the work for you.

Here are Linus’ (LTT) thoughts (and explanation) on this program:

This is a bit of an old video, so their version is outdated, but overall, the process is the same. If you feel like this program is for you, here’s what you’ll need to do:

Your Ryzen processor is now undervolted! Keep in mind; there are more adjustments available if you want to delve deeper into Clock Tuner Undervolting.

However, if you want to push this undervolt further, it’s probably a good idea to try BIOS undervolting.

With a baseline ready, we can now move over to making the power adjustments in BIOS that will actually do the undervolt. There are a few ways we can do that. But, first, head into your BIOS by restarting your system and then hitting the F2, F10, and/or Delete keys.

Here, we can make a couple of adjustments. We could do traditional undervolting and tweak the Vcore, cTDP, frequency, and voltage values. This kind of undervolt requires a lot of trial and error.

Fortunately, PPT (Power Package Tracking) is a tweakable value that can make undervolting so much easier on Ryzen processors. So, let’s start with the easiest.

So PPT adjusts precisely how much power is sent to the socket. So, instead of going through extensive trial and error, we can just lower the PPT value.

Where this option is located depends on your motherboard, so look for these settings: XFR Enhancement, Overclocking, Advanced, AMD CBS.

Alternatively, you can use Ryzen Master to change PPT. But, note that some people have reported that Ryzen Master does not always change the new values.

In our case, we have a Ryzen 3700X, a 65W TDP processor, which means that 88W is the default PPT. So naturally, we need to go lower than that for an undervolt.

Use AMD’s website to find out your CPU’s TDP.

Supposedly, undervolting with PPT leads to minimal performance degradation, while adjusting Vcore manually can lead to larger losses in performance.

However, Vcore undervolting can deliver the best possible outcome with enough testing. But, it is going to take some time.

The process of tweaking this value is very similar to playing around with PPT or 1Usmus’ Clock Tuner.

Find the CPU Vcore value in your BIOS and start with small decrements. Start with an offset as low as -10mV and up to -150mV.

Of course, with every adjustment, you need to boot into Windows, do a few Cinebench runs, and write down the values. Write down idle values, too, if you want.

We recommend staying around that -100mV point as the rewards after that can be detrimental (lose a lot more performance per watt). Of course, some CPU samples can be much better at this than others. It’s up to you to test it.

Finally, there’s the option of setting voltage and frequency on your own, but we don’t recommend it as these other methods will probably work just as fine.

If not, you’ll need to do small decrements on these values and tons of testing until you find that sweet spot. For a more detailed explanation of this part, check out SFF Life’s guide.

Intel’s overclocking or undervolting can be done through the Extreme Tuning Utility (Intel XTU) or BIOS.

Note that the undervolting trial and error process is similar between AMD and Intel CPUs. So, we suggest reading the “Setting A Baseline” section of this article. A baseline is essential to ensure that your undervolt does not hinder the CPU’s performance.

First things first, you’ll need Intel’s program, so make sure to download it from the official website. Next, run the setup file, follow through with the installation and then run Intel XTU.

At first glance, the whole UI might seem a bit complicated, but we’ll guide you through it. It’s actually not difficult at all.

First, head over to the Basic Tuning tab to find the benchmark. You can either use this one since it is more convenient, but if you want, you can also use Cinebench R20.

Once you’ve done two or three benchmarks with sensor readings to set a baseline, head over to the “Advanced Tuning” tab and then into “Core.” This is where most of our focus should be.

From here, the process is actually quite simple. First, you will need to make small decrements to the “Core Voltage Offset” setting (see image below.)

So, if it starts out at 0.000, try moving the slider to create a -0.020mV decrement. After this change, rerun a couple of benchmarks, and write down the score and the temperature/power readings.

Now, let’s do a -50mV decrement. Again, test and write down the values. Is the system stable? Well, we can check that by running a multi-core Cinebench R20 test.

If it is stable, you can move on to make more changes. However, after -0.050mV offset, we recommend going for much smaller decrements (-0.005mV to -0.010mV). After every change, you will need to do a benchmark and a stability test.

Keep in mind; different generation Intel CPUs have other undervolting limits. So, keep track of the CPU’s stability after every offset change. But also ensure that the impact on the CPU’s performance isn’t too significant.

Intel’s XTU program provides more than enough settings to properly overclock or undervolt your CPU. Even tweak the GPU.

However, if, for some reason, you want to do an undervolt through the BIOS, you can do that as well. So you’ll have more control there, but it’s also a bit riskier.

Either way, here are some steps to guide you through it:

After that, repeat steps 3 to 5 to slowly decrease the voltage until you reach your power usage goals.

The act of overclocking, undervolting, and everything else that comes with these processes is not easy. But, with extensive guides such as this one above, you should be able to safely get through it and turn your system furnace into a cool CPU. 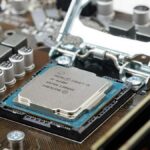